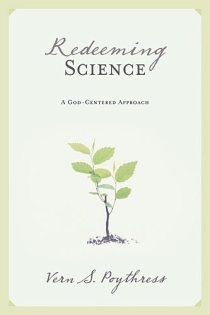 This outrageous statement comes from the book Redeeming Science, by Vern Poythress.  It flies in the face of the conventional wisdom that science disproves the existence of God, or at least that scientists must set aside any belief in God in order to do science well.  Atheist thinkers like Richard Dawkins, Daniel Dennett, Sam Harris, Christopher Hitchens, and Victor Stenger have published popular books equating science with atheism and insisting that the lack of scientific evidence of God’s existence confirms his non-existence.  On the surface, the claim that all scientists believe in God is nonsensical.  So what does Poythress mean?

Vern Poythress, like me, is a man who loves God and loves science.  Like me, he thinks that the realm of science need not be abandoned to atheist thinkers.  Unlike me, Dr. Poythress is Professor of New Testament at Westminster Theological Seminary, and holds degrees in mathematics from CalTech and Harvard.  He spoke at my church recently on the topic of Science and Inerrancy, and I appreciated his talk enough to download his book.

Science is a process of describing the way the universe works.  It codifies experimental data into a series of “laws”–equations that effectively predict the outcome in a given circumstance.  Scientists rely on these laws, and assume that they exist–in fact, part of the atheist’s argument is that the more predictable the universe, the less we need to rely on the existence of a god to explain it.  Poythress contends the opposite: that the existence of natural laws is testimony to the existence of an eternal, unchanging God controlling everything.  The laws are reliable because God is faithful.  When a scientist studies natural laws, he is not studying some impersonal machine, but the continuous actions of a consistent God.

After all, why should there be natural laws?  Why should actions in the world be repeatable?  Why should the same equations work equally well at the bottom of the ocean or on the surface of the moon?  That the world does work this way is a central principle on which all science is based, but there is no reason for it, apart from God.  This is the concept behind Poythress’s outrageous statement: all scientists, whether they acknowledge it or not, rely on the character of God for their work.

This is consistent with things I’ve said in the past, but Poythress lays out his argument clearly and relentlessly, leaving little ground to object from the point of view of either Scripture or science.  He takes apart the question of Genesis 1 with similar confidence, bringing the reader to understand what Genesis does and does not say, distinguishing between teachings that are theologically indispensable for those who take the Bible seriously, as opposed to issues on which Genesis simply does not speak.  At each step, he is logical, easy to understand, and non-confrontational.  There is no ranting here, no vitriol, no cheap shots at opponents’ positions.  He wants his readers to love Scripture and love science, just as he does, and it shows.

Best of all, Poythress offers the digital version of Redeeming Science for free!  I highly recommend it.