My friend Megan O’Keefe has a book coming out!  Not just any book, but her first book, called Steal the Sky, and it’s due to launch on January 5.  I have it on good authority that it’s an exciting caper of a novel, a conman’s attempted heist of an airship, that sounds a lot like The Lies of Locke Lamora (which I loved).  Here is Megan herself to tell us about a small part of this book, namely… a hat. 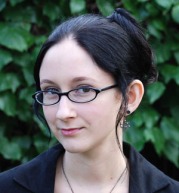 When I set out to write Steal the Sky, I knew I wanted Detan to have a friend, a sidekick. Someone he could rely upon in a pinch, who could function as a level head when Detan’s scheming inevitably spirals out of control. Tibal, aka Tibs, is the sidekick I set out to write. He’s hiding a deep vein of anger, but he’s ultimately smooth and calm, the steady hand guiding Detan as he pinballs across the Scorched Continent.

Upon receiving feedback from my beta readers, however, I discovered I’d inadvertently inserted a third sidekick: The Hat.

There’s nothing particularly special about this hat. It’s big and it’s grey, and it has a roguish dip to its wide brim. Eventually it earns itself a character-building singe, and that sweat stain around the band is never coming out. It doesn’t speak, or hover, or do anything that Michael Bay would feel compelled to add a lens flare to. But one of my beta readers had written, in all caps right at the top of her comments: LOVE THE HAT! MORE HAT!

Well. You can’t ask for feedback any clearer than that.

While the hat might not be anything special to look at, it functions as a symbol of Detan and Tibs’s friendship. As it changes heads throughout the book, it becomes a physical manifestation of the back-and-forth nature of their relationship. On one occasion, its simple presence nearly brings Detan to tears. In Detan and Tibs’s messy, transient world, the hat is something solid they can both hold on to.

Needless to say, when I saw the first drafts of the cover for Steal the Sky, I was delighted to see that the hat had been included in all its floppy grey glory.

Megan lives in the Bay Area of California and makes soap for a living. (It’s only a little like Fight Club.) She has worked in arts management and graphic design, and spends her free time tinkering with anything she can get her hands on. Steal the Sky is her first novel.